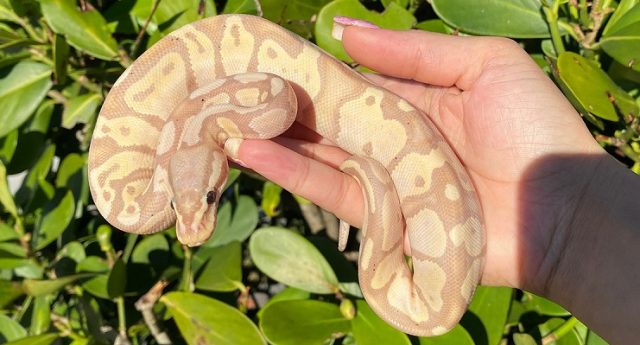 Ask any reptile-enthusiast for their recommendation of a fun beginner snake and there are three species you’re sure to hear over and over again: boa, ball python, and corn snake. Each boasts a lovely temperament, a healthy tolerance for human interaction, and straightforward care needs. While having options is always a good thing, it can make choosing just one a challenging task. Skip the hours of research. Instead, use this quick guide to the differences between these popular snakes to find which is right for you.

‘Boa’ is a broad category of snakes that includes all forty species of boa constrictors. However, whenever you hear it mentioned it is most likely referring to the ‘common boa’ (Boa constrictor imperator) or red-tailed boa. It’s important to note that there is also the “true” red-tailed boa, Boa constrictor, which is an entirely different subspecies of snake–an important distinction to make when it comes to actually buying one.

The common boa is the largest compared to the ball python and the corn snake. It typically grows to be about 8 feet in length (though there are countless stories of them growing to be even larger). Despite its intimidating appearance, the common boa is a delightful pet that is docile and sweet, a true gentle giant.

Widely considered to be the most popular of all pet snakes, ball pythons have garnered a large fan base for a number of reasons, one of which is their manageable size. The average ball python only grows to be between 4-5 feet. However, being medium-bodied snakes, they still cut an impressive figure slithering around in their enclosures. The other reason is that ball pythons boast thousands upon thousands of morph combinations.

Morphs are the variations of an animal’s appearance that differ from the standard. While your basic ball pythons are mostly a brown color with patches of tan and black, the incredible variety of ball python morphs have allowed this species to be found in all sorts of colors and patterns. This element of customizability has made balls one of the most sought-after species by both beginners and experienced herpers.

If you’re looking for a no-fail, impossible-to-mess-up beginner snake, you’ll find no better option than the corn snake. This mild-mannered Colubrid is thin-bodied (so extremely easy to handle), a manageable length (typically 2-5 feet), and incredibly resilient. They can grow in all sorts of conditions and are much more forgiving of any mistakes made when caring for them.

However, the most notable difference between corn snakes, boas, and ball pythons is going to be its lifespan. While boas and balls can live upwards of 20 or 25 years, corn snakes only live for about 6-8 years. If you’re looking for a pet snake that’s not as much as a commitment, this species is a perfect option.

Where To Buy Them

Boas, ball pythons, and corn snakes are all tremendously popular species that are readily available in most places where reptiles are sold. For the greatest selection, you’ll want to take your search online (especially if you’re looking for specific morphs of ball pythons for sale).

How to Find the Best CBD Dog Treats

How to Make Caring for Your Pet More Affordable

How to Tell If Your Pet Hedgehog is Not Feeling Well

What are the Pet Daycare Franchise Opportunities

Is Your Dog In Pain- 4 Signs To Look Out For